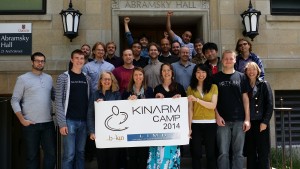 Coming from all around the world including Fukushima University and UC Louvain, KINARM users gathered for 5 days of intensive training in the use and programming of KINARM Labs…

The week focused primarily on custom task development for the KINARM Labs and ensured that registrants were paired by platform to a highly skilled user from Queen’s University. 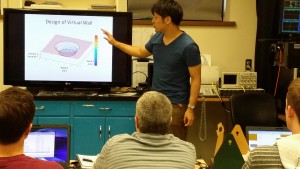 As noted by camper Tomohiko Takei, post-doc at Queen’s University, previously of the National Center of Neurology and Psychiatry in Tokyo: “before I attended the KINARM Camp, I had only a little experience to modify the task programs. The KINARM Camp deepened my understanding of the whole system of KINARM, construction of the task programs and protocol and suggested the applicability to the various needs of basic and clinical researchers. Now having acquired correct knowledge on the sophisticated “tool”, I have broadened the possibilities of my research significantly.”

The program’s goal was to ensure by the end of the week, each camper could create a custom task program of their design, collect data on with the task and make a presentation about the task to all campers.  To support this objective, the campers started each day with a lecture which was then complimented by assigned exercises with hands-on support by Queen’s trainers in a workshop setting.  The teams split locations between KINARM Labs at Queen’s University and BKIN Technologies to ensure plenty of hands-on access to KINARM Labs.

All camper’s expressed their thanks to the team from BKIN and Queen’s for holding the Camp.  As Kyunggeune (Ted) Oh of GeorgiaTech expressed: “KINARM camp gave me a huge amount of inspiration as well as practical skills that I couldn’t get from KINARM manual. This is a great chance for future campers to bring their own experimental paradigms and try to solve them with KINARM trainers; it’s a great chance to get familiar with KINARM.”

Please feel free to contact us, we’d be happy to help.